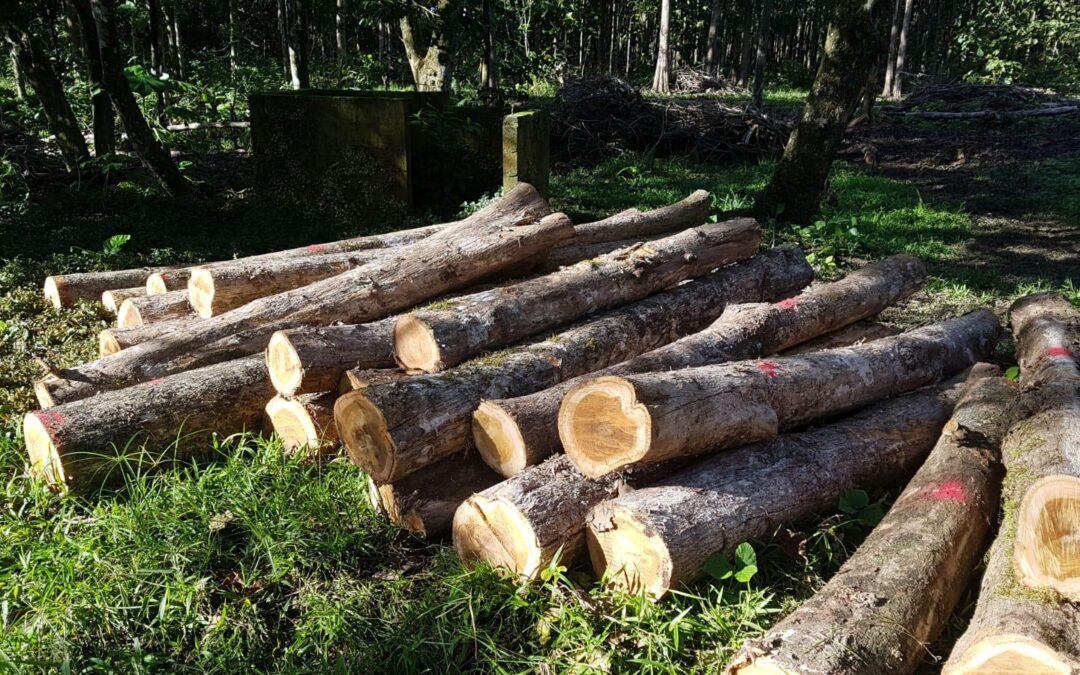 At approximately 3am on Aug 5 th, we received multiple calls and messages, mostly from forest engineers and plantation workers, informing us that the storm caused by the Intertropical Convergence Zone over Costa Rica was hitting the country and causing considerable damage. We quickly learned our Mys-Teak plantation in the Sierpe Region of the province of Puntaranas was hit as part of the storm. Immediately we requested photos, videos and an official report be sent to us so we could understand the magnitude of the damage. The results of the report informed us that in our plantation, the first section with the largest trees had been hit the hardest, the second section, in more hilly terrain only suffered light damage and that a portion of the third section lost 100% of the trees in a 70 metre wide by 145 meter long portion of plantation with the rest of the trees in the section virtually untouched.  In both the first and third sections the primary damage was contained to extremely highly localized “pathways” carved into the plantation with damage in these areas approaching 100%.  Though incredibly unusual for Costa Rica, the highly focused damage pattern strongly suggests we were subjected to two highly localized tornadoes at opposite ends of the plantation.  In total, we estimated a loss of approximately 400 – 500 trees. However this was just an estimate and it is difficult to tell the full magnitude of the damage without being on site.

The COVID pandemic added to the challenges of assessing the damage in person. Normally it would be pretty straight forward to pack our bags, head to the airport and go back to Costa Rica. Because of the pandemic, there were so many unknowns including would we be able to enter Costa Rica? And, if we did, could we come home afterwards? Would we have to quarantine upon arrival?  Costa Rican airspace remained closed to visitors and no airplanes were flying, however we were given permission to board a repatriation flight from Mexico after testing negative for COVID. We arrived in Costa Rica on the 26th  August 2020.

We ended up staying near the plantation out of necessity as Costa Rica’s restriction order on cars didn’t allow us to go very far. When we got to the plantation, the site was as expected however still, as the “father” of these beautiful, carefully managed trees, it was hard to witness the almost total destruction near the front of the plantation. There was so much damage in the first 70 metres of depth we couldn’t walk in a path as one didn’t exist anymore. The trees were strong and many, instead of falling over were simply ripped apart 60 feet in the air leaving an eerie pole like look to the forest.  On the ground, a confusion of trunks, branches and stumps often 15 feet deep confounded easy (or safe) resolution. The number of trees down were in the hundreds. The destruction of what Robert calls “his babies” was shocking. Every day for the next month, we were constantly moving, pulling, cutting, selecting, and organizing wood. This wasn’t like anything we had done before as we typically had paths to maneuver between the trees. Now we had more obstacles in our way as we had to jump and walk around piles of debris. To add to the challenges, the rains continued daily and our extraction operations, using teams of oxen left two foot thick mud to navigate through.  Timing was critical as leaving this quantity of wood on the plantation during the wet season for any length of time would have compromised the quality of the wood – something completely unacceptable to us.

By mid-September, the first stage of tasks was complete. While we were happy at our progress, our team was under a lot of stress and exhaustion.  We decided to take a pause in operations, mostly to allow our four teams of oxen (and their owners) to rest and recuperate.  Even today our team is still on site working on the cleanup process, and salvaging the trees that had fallen or were in threat of falling.

This has been a tremendously difficult year for everyone globally, but we believe that now more than ever, responsibly produced wood, without chemicals, supporting traditional and local labour is critical to the strengthening of our relationship with the environment and cultures that support us.  Thankfully we still have many thousands of trees growing larger every year.   Come May of 2021, we will replant the areas that were devastated, and with the cooperation of Mother Nature (and some superior management from Mys-TEAK), in 15 years,  we will have a new forest, growing tall and strong for the next generation.